In 2018, Counseling & Recovery Services of Oklahoma created a series of shelter ads through Transit Advertising, Inc. to promote their “Don’t Suffer Alone” message.

The powerful advertisement displayed a dark silhouette of an individual sitting on the ground with their head lowered on a bright background. The phrase, “Don’t Suffer Alone” was boldly displayed across the top of the ad with the call to action, “We can help” proceeded by contact information. 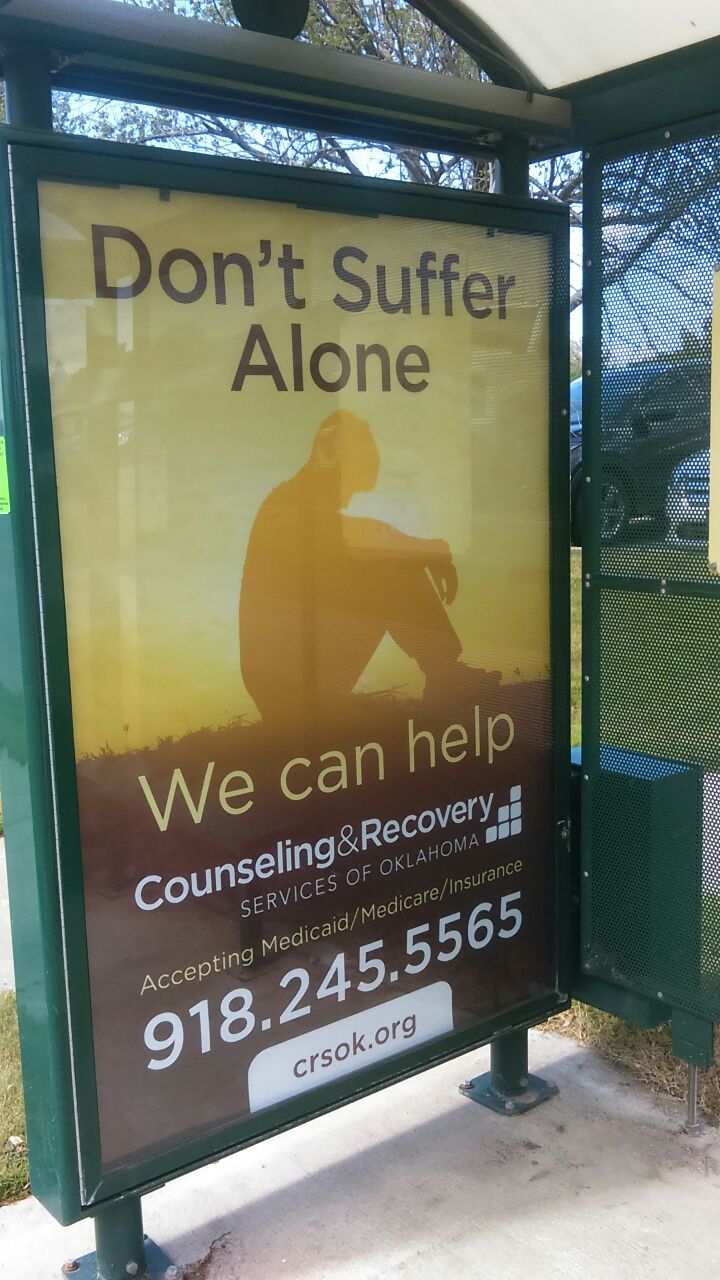 On his way out of Tulsa, the man saw the “Don’t Suffer Alone” bus shelter ad. Rather than proceeding with his plan, he decided to call the number on the advertisement and make an appointment as a last-ditch effort to find a reason to live. After his initial meeting, the man started a treatment plan and is on a path to recovery.

Tulsa bus shelter advertisements receive up to 16K views per day! Shelter ads are located on bus shelter coverings. Drivers, pedestrians and bus riders see these ads. Transit Advertising, Inc.’s team helped Counseling & Recovery Services of Oklahoma create a plan to maximize ad exposure given their budget. The counseling center also did a great job of choosing impactful imagery and language that propels those in need to act. Together, the powerful advertisement design and plan for maximum exposure ensured a person in need received life-saving assistance.

The bus shelter advertisement strategy was effective! Counseling & Recovery Services of Oklahoma’s advertising strategy with Transit Advertising, Inc. helped to save a life.

We were honored for our rebranding, website and social media efforts. 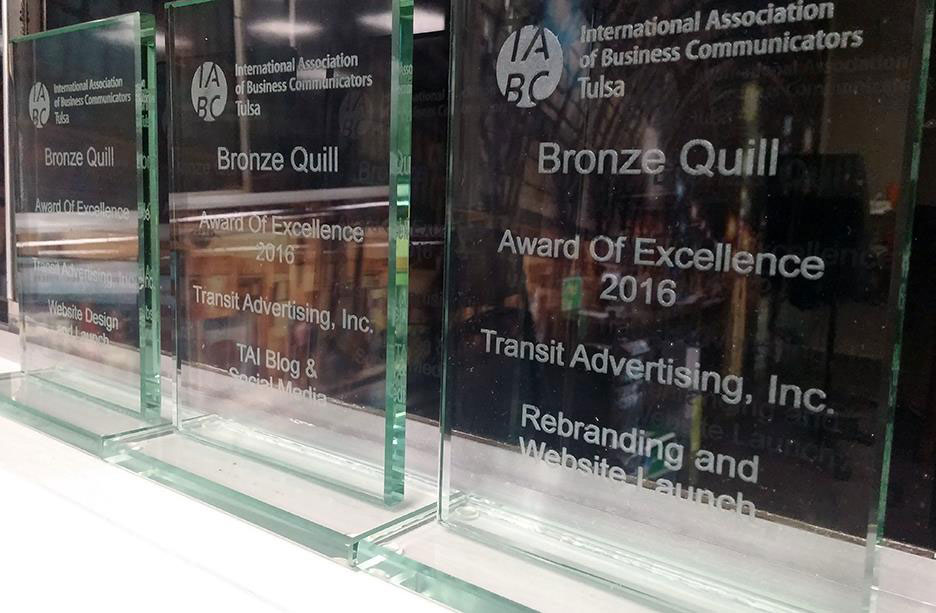 Transit Advertising, Inc. came under new ownership in July 2015 and the company found itself without a brand identity, website or social presence. Owner Ryan Myers put together a team to rebrand the company.

It was important to Ryan that Transit Advertising, Inc. was easy to find online and communicated what the company has to offer. Our team created a new logo, implemented consistent messaging and created a strong web presence in only six months.

Tulsa’s IABC chapter launched the call for submissions in late 2015. Our team submitted three entrees for the company’s rebranding and website launch, blog and social media, and website design. Each submission was honored with an Award of Excellence, the highest award offered by local IABC chapters.

We are proud of our team and excited to share the benefits of transit adverting with the communities we serve.

In 2015, SeekingSitters husband and wife team, David and Adrienne Kallweit, designed the Work/Life Balance Tour. The goal is to travel across the nation visiting franchisee owners and tell the SeekingSitters story.

Adrienne worked with Transit Advertising, Inc.’s Art Director to design a wrap for the RV. The RV is the heart of the Work/Life Balance Tour and serves as a moving billboard that travels with them across the U.S. Utilizing SeekingSitters key messages, graphics, and the map of the United States, the final design was composed. 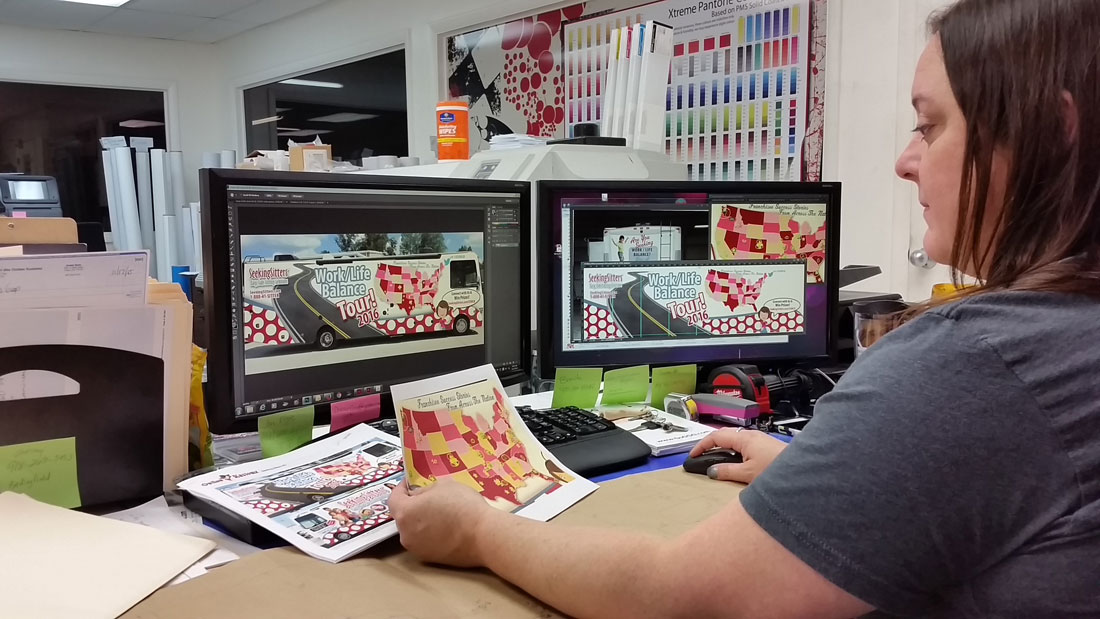 Our team of expert installers wrapped the RV and in January 2016, the Kallweit’s were off on their tour of 28 locations in eight months.

The wrap on the RV is designed to capture attention on the road and while the family is stopped at tour destinations.

The Kallweit’s use the RV as a base camp for SeekingSitter events.

Franchisee owners pin their location on the map on the side of the RV. 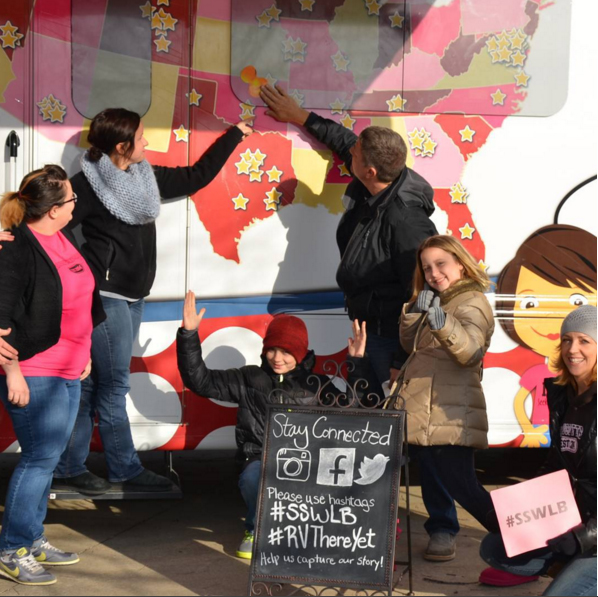 The full Work/Life Balance campaign includes three online contests for their target audience to engage with the brand.

The SeekingSitters Work/Life Balance Tour is a great example of how advertising on a transit vehicle can be used as the nucleus to a strong campaign that utilizes events, word-of-mouth, and social media.

How could you tell your brand’s story with Transit Advertising, Inc.? 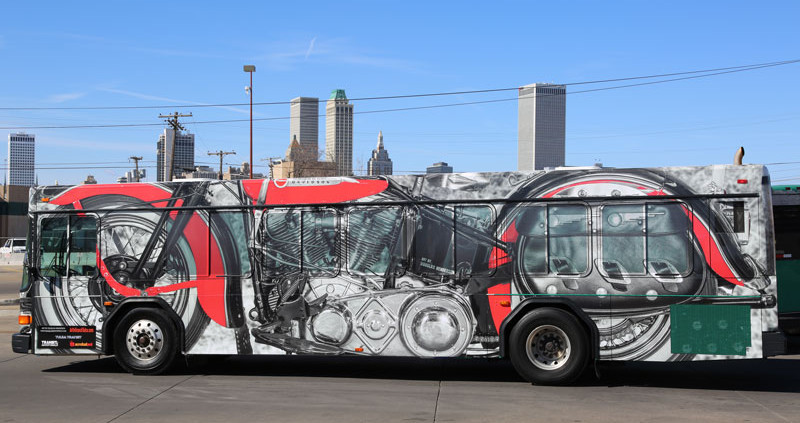 This is happening in Tulsa, Oklahoma. For the remainder of 2016, Douglas Henderson’s photography of a 1948 Harley-Davidson Flathead, equipped with the historic Panhead engine, is massively displayed on a Tulsa Transit bus. This large-scale form of public art is running on Tulsa’s streets 14 hours a day, six days a week.

The third annual Art In Transit Tulsa contest, in partnership with Tulsa Transit, Transit Advertising, Inc., and Acrobat Ant, called for Oklahoma artists to submit bus designs for a chance at their design being showcased on a transit bus for one year.

Out of nineteen submissions, Henderson’s photography was selected and is now bringing public art to the urban landscape. As a world-renowned professional photographer he saw the contest as a way to stretch his artistic and graphic design ability.

“I did not expect to win. I first photographed this bike for a poster design. I thought the bike was beautiful and knew I would use the photographs again somewhere down the road,” Henderson said. “This is now, by far, the largest image I have had printed to date.”

The owner of this now famous Harley-Davidson wishes to remain anonymous but the details of the bike are on full display.

“You can see every chip and scratch this bike has collected over the last 68 years,” Henderson said. “If you look closely, you can see a fly that landed on the bike during the shoot.”

As an Adobe Certified Expert in Photoshop, Henderson used his artistic skills to add details of Tulsa’s skyline and Tulsa Transit’s downtown station in the reflection of the motor’s air cleaner. The saddlebags have ‘Art In Transit’ digitally etched into the rustic leather and, if one looks close enough, a self-portrait of the photographer can be seen in the engine.

Myers-Duren Harley-Davidson of Tulsa hosted the unveiling of the bus on February 16. Tulsa photographer, David Maloney, came to see the bus in person.

“I love how he added the downtown transit station into the photo. It brings the design home to our Oklahoma roots. This is our Tulsa, our bus. He is representing our city well,” Maloney said. “Doug is a genuinely humble guy. Winning this contest gives him the recognition he deserves among our photography community.”

Our team printed and installed the art onto the bus, shelters and benches. It’s exciting to see the creativity submitted by our fellow Oklahomans for the Art In Transit contest and we were thrilled when we saw the winning design. Installing this design on a Tulsa Transit bus brings a recognizable piece of American tradition onto a much larger scale.

Transit buses provide a large versatile canvas that can transform any message, advertisement or image into moving art.

All the bus stop designs can be viewed at the following locations in Tulsa.